Nowadays, librarianship and archival work are typically regarded as female-dominated professions. Aged 21, fresh-faced and just out of university, I got a part-time job at an antiquarian library and quickly became accustomed to a perfect matriarchy: our small staff was headed up by a formidably well-read woman who seemed to have worked there forever, supported by an all-female team except for two male employees. Back then, I was vaguely aware that my job was tied to gendered ideas about knowledge exchange and custodianship, and that these things had historically been feminised – which is partly why I was surprised to learn that the library had appointed its first female librarian as recently as the 1950s.

It’s a similar state of affairs at Chatsworth, where I research the history of the Devonshire Collection Archives and the substantial contributions that women have made to them over the years. The known history of Cavendish-employed librarians dates back to the seventeenth century, when the philosopher Thomas Hobbes was hired by William Cavendish, 1st Earl of Devonshire, to tutor his son; in the course of his employment, Hobbes also catalogued the library at Hardwick Hall and as such, Hardwick’s earliest known library catalogue (c. 1628) is written in his hand. Various male scholars, Dukes’ agents, local clergymen, and even an infamous forger succeeded Hobbes as librarians – until in 1904, a woman named Eugénie Sellers Strong was appointed Librarian to the Duke of Devonshire. Strong by name, Strong by nature: a highly accomplished classical archaeologist in her own right, Eugénie was the first woman to take up professional employment in this capacity, and although she was Librarian for under five years, she certainly made an impression on the Cavendish family. In this post, I introduce Eugénie’s remarkable life and her years at Chatsworth.

Before we get into that, though, a burning question: just how rare was it to find a woman presiding over a private library in the early twentieth century? According to this 1907 Sheffield Daily Telegraph article entitled ‘A Lady Librarian’:

Mrs Strong […] has the distinction of being the only lady who controls an important library in this country - namely, that of the Duke of Devonshire at Chatsworth.

This might sound like something of an overstatement, but female librarians were few and far between in the early twentieth century. Records for the 1901 UK census show that of the 785 people who gave their occupation as ‘librarian’, only around 30% (239) of them were women – compare this with the most recent study of information workers (including librarians and archivists), which found women make up 78.9% of the workforce. Census records don’t necessarily provide a clear indicator of the employment situation in private libraries, because country house librarianship is steeped in a historically male-dominated intellectual tradition which sets it quite apart from public librarianship. As Mark Purcell observes in The Country House Library, in many country house libraries, the owners were either bibliomaniacs who undertook tasks like cataloguing themselves, or they employed someone – usually a private scholar or an established curator – to keep their libraries in order. Many librarians were employed on an ad-hoc basis, such as Sir James Lacaita, who was a politician first and foremost but was employed by the 7th Duke to catalogue Chatsworth’s library during the summer months in the 1860s-70s. Extant library catalogues in the Devonshire Collection Archives indicate that female librarians were very rare indeed at Chatsworth, and the few women who did have oversight of the library and the nascent archival collections in nineteenth-century Chatsworth were family members or close friends (more on this in a later blog).

All of this changed in 1904, when Eugénie Sellers Strong became Librarian to the 8th Duke of Devonshire following the death of the previous Librarian (and her husband), Sandford Arthur Strong. Born in London in 1860, Eugénie Sellers was the daughter of wine merchants and she lived a Continental childhood in France, Italy and Spain before reading for the Classical Tripos at Girton College, Cambridge in 1879. Although Eugénie was among the first women in England to get a university education (Girton was Cambridge’s first women’s college, established only a decade earlier), the University wouldn’t award degrees to female students until 1947, meaning she couldn’t graduate. Following Girton, Eugénie became a distinguished classics scholar, studying under German archaeologists including Adolf Fürtwangler and, in 1890, becoming the first female student at the prestigious British School at Athens. She also frequently lectured on Greek and Roman art at institutions like the British Museum and University College London. Eugénie was well-known in the artistic and literary circle of London and Rome, and her long list of friends included the classicist Jane Harrison, the poet Vernon Lee, the archaeologist Gertrude Bell, and the Pre-Raphaelite painters William Holman Hunt and Frederic Leighton.

In 1897 Eugénie married the art historian S. Arthur Strong. Their marriage was partly founded on the understanding that Eugénie would retain her intellectual freedom to continue researching and writing on Roman sculpture – but in the years following, her academic career quietened down. Even so, the relationship was a happy one and Eugénie was devastated when in January 1904, Arthur died aged just 40 following a long bout of ill health. Although Arthur’s death caused Eugénie much anguish, the Duke and Duchess of Devonshire’s offer of his job role to her would’ve certainly diminished the stress of having to work out new economic means as a widow. This also afforded Eugénie authority over one of the country’s most significant private libraries, a position which would’ve been nigh impossible for a woman to secure without domestic or marital connections.

Eugénie’s employment at Chatsworth wasn’t without its tensions, though. Correspondence between Victor Cavendish and his wife Evelyn (Evie) Cavendish, who became Duke and Duchess of Devonshire in 1908, suggests Eugénie was perceived as a rather stubborn, vocal woman whose eye for detail came off as fastidiousness. Evie took issue with Eugénie – writing to Victor in December 1904, she quips:

There is no news here except that Mrs Strong has gone off her head again. She did it once before in her youth.

It seems Eugénie possessed too strong a personality for Evie’s liking. In a letter dated 1 August 1905, she complains that she’s ‘completely overwhelmed by Mrs Strong’s flow of conversation’ [DF7/2/2/1/14/36], writing to Victor the next day that:

Mrs Jayes and Mrs Strong think they are doing wonders in the muniment room [at Hardwick Hall]. It seems to us that they have cleared all the papers out, only to make a fresh litter in the smoking room. […] Clever people certainly have odd ideas about things.

What Evie refers to here is actually Eugénie’s work to transfer the Hardwick Manuscripts – now one of our most important archival collections – to Chatsworth, where she catalogued them and made them accessible for research. By the Duchess’s account, though, Eugénie’s work was meddlesome, tiring, and probably fruitless.

By mid-1909 Eugénie was moving on from Chatsworth, having accepted Assistant Directorship of the British School at Rome; she would remain in the city until her death in 1943. It’s not clear why she left Chatsworth, whether she was dismissed or left of her own volition – but Eugénie’s own lengthy, often pedantic and slightly condescending letters to Evie suggest that she regarded the Duchess to be forever meddling in matters about which she knew little. Whatever the reason for their apparent fall-out, Eugénie harboured a lifelong love and appreciation for Chatsworth and she continued to correspond with Evie long after her departure to Rome, usually to inform her of some personal research she’d done on the Devonshire Collections. Towards the end of her life, in 1938, Eugénie wrote to Duchess Evie about some Derbyshire news she’d gotten wind of in Rome – fondly, she writes:

Forgive me for inflicting this note upon you, but you know how much I care for all that concerns Chatsworth.

Eugénie’s short career at Chatsworth made a lasting impression on her, opening doors which would’ve otherwise remained firmly closed. Likewise, the important work she did under the catch-all job title of ‘Librarian’ opened up the Archives’ incredible collections for researchers today. As my own research progresses, I want to explore the female intellectual and artistic networks of which Eugénie was a part – and hopefully share my discoveries on this blog – but for now, I hope you’ve enjoyed getting to know this remarkable woman and her years at Chatsworth. 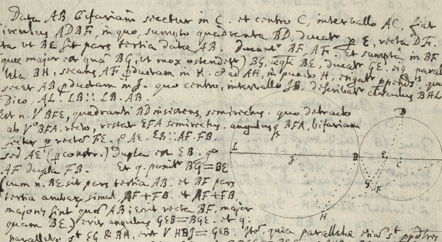 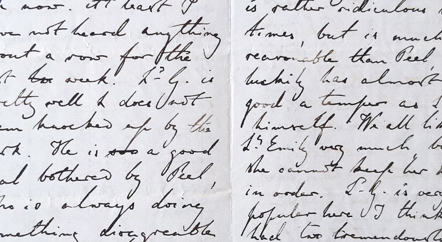