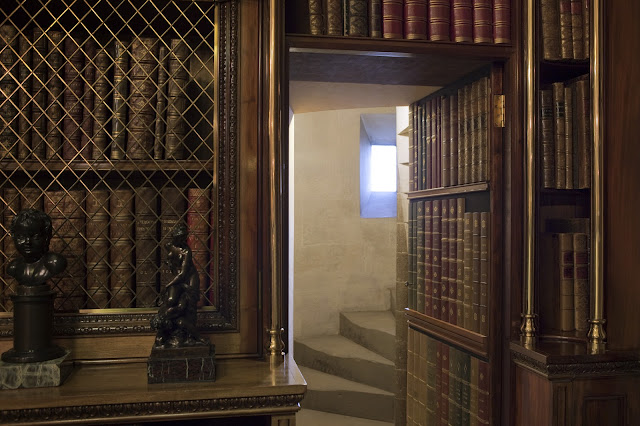 Lord Bacon's Pygmalion is, I will grant you, an odd place to start.

There are thousands of actual books here. Classic works on science, history and geography, books in Latin, German and French, ornate religious texts, folios of poetry, hefty studies of architecture; all stand to attention on their shelves in the Chatsworth Library; all wait patiently to have their story told. And yet, I have decided to use my first substantial blog post to discuss books that were never written; a whole collection of books that never strictly existed but nevertheless have a history to reveal.

This ‘invisible library’ of Chatsworth contains over 100 such works. They have authors, many of them recognisable, and titles, many of them probable enough, but they are products of the imagination, not the pen. There is nothing inside, not even blank pages. It is a library of ‘fake’ books, or rather fake titles for there are no books to speak of, only spines. Having told you this, you might be tempted to refer to the following book in this collection for an appropriate response but please bear with me.

Some of the humour of these titles has aged somewhat (or was never that funny to begin with!) Other titles become amusing only when the cultural context of the early nineteenth century is understood and explained. Most, thankfully, remain immediately comprehensible and their ability to make us chuckle reveals how little our language and sense of humour has changed in 180 years.

· Life of Ketch, with Cuts of his own Execution – Jack Ketch was a famous executioner, who famously dispatched the 1st Duke of Devonshire’s friend and political ally, William, Lord Russell.

· Macadam's Views in Rhodes – An homage, in the form of a pun, to the father of modern road engineering, John McAdam. When tar was later introduced to the ‘macadam’ method, it resulted in ‘tarmac’.

· John Knox, On Death's Door – Reads perfectly without explanation but it is well worth imagining John Knox, protestant clergyman and leading light of the Scottish Reformation, approaching his fate with trepidation.

To hold these fake titles, fake bookcases were crafted and placed at each end of the library. They conceal doorways but there are no Priest holes or Batcaves beyond. Instead they give access to stone stairs that lead to the library gallery above.

· Inigo, On Secret Entrances – A real gem that works on three levels: as a simple play on words; as a reference to the fake bookcase that it sits on; and in recalling the great architect, Inigo Jones, whose name had been intimately associated with Chatsworth House, ever since William Talman was employed by the 1st Duke.

The idea of inventing amusing, fake titles for books is nearly as old as books themselves. However, the practice of crafting an actual fake bookshelf for the purpose of amusement, and not just the concealment of clergy, fugitives or contraband appears to have become commonplace in the mid-late nineteenth century. A particularly famous example of this practice was the ‘invisible library’ commissioned by Charles Dickens for his home at Tavistock Place in 1851 – now partially reconstructed as part of the New York Public Library exhibition.

· Captain Parry, Designs for Friezes, 2.vols – Dickens’s library contained a similar work: Captain Parry’s Virtues of Cold Tar. William Parry was a renowned nineteenth-century Arctic explorer. Of the two titles, I prefer the Chatsworth one as it has a decent pun on the word ‘Friezes’.

The idea for an ‘invisible library’ at Chatsworth was well-formed in the mind of the 6th Duke of Devonshire when, in 1831, he requested the assistance of the writer, poet, engraver and king of the pun, Thomas Hood, to come up with some amusing names for the ‘unreal folios, quartos and duodecimos’ that would fill the fake bookcases of his library. The Duke had seen this done elsewhere but wanted to improve on what he dubbed ‘the tired old labels’. Over the next year Hood provided a list of over 70 fake titles. These were supplemented by ideas from the Duke’s friends and probably himself as he was given to joking and punning. From this store of ideas over 90 titles were commissioned and placed on the fake shelves where they remain to this day, out of sight of the public tour.

· Racing Calendar Eclipses for 1831 – A rather obscure reference to the famous eighteenth-century horse, Eclipse.

· Boyle, On Steam – Simple but effective. Also contains a reference to Robert Boyle, the famed scientist, whose family were to be joined through marriage to the Cavendishes in the eighteenth century.

Look out for part two when the story continues in the twentieth century with a Knight, a Duchess and a Comptroller...