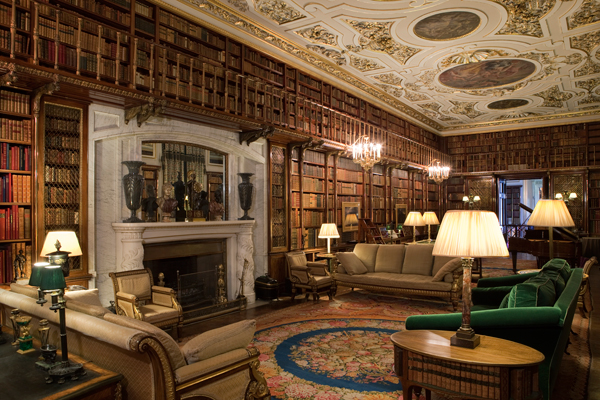 I have now come to the end of my sixth month research placement at Chatsworth Library. It has been a fabulous opportunity and privilege to have access to one of the great private library collections.
I have sought to add to our existing knowledge of the library’s contents by conducting a broad subject survey to highlight the key strengths of this vast collection and will now share some of my findings with you.

Chatsworth Library remains one of the largest private libraries in the country. On the issue of exact numbers, the oft-quoted figure of 30,000 volumes is likely to be broadly accurate but more cataloguing and research is certainly needed.

The age of the books varies hugely. A significant proportion of the collection is over 400 years old including several hundred Incunabula (books printed before 1501). However, most of the works here were published between 1600 and 1850. At first glance, the library may appear to be a settled and coherent entity but it is more accurate to think of it as a collection of other libraries mixed in with a multitude of books bought and acquired over the centuries by members of the Cavendish family. This tradition of collecting large numbers of books can be traced back to the family’s time at Hardwick Hall in the sixteenth and seventeenth centuries where the collection was overseen by the family’s tutor and academic-in-residence, Thomas Hobbes. Today’s library at Chatsworth also contains much of the book collection formerly owned by Richard Boyle, 3rd Earl of Burlington, as well as the huge library of Henry Cavendish, the experimental scientist. The 6th Duke of Devonshire collected much of the family’s disparate collections together at Chatsworth in the early nineteenth century and added to them with individual purchases; his successors have done likewise.

Arts and architecture are well represented in the collection. Studies of classical architecture abound, many of them bearing dedications to the 3rd Earl of Burlington, a Palladian enthusiast. The collection has a strong range of books on the fine arts and plastic arts; studies of paintings, drawings and sculpture are augmented by a mass of works dealing with antiquities, in particular those of ancient Rome. Somewhat surprisingly there is no significant collection of music books, works about musical productions or even opuses of prominent musicians.

Works on numismatics – particularly Roman coins – and studies of historic libraries reflect the interests of the 6th Duke in particular, though book collecting is a trait that all the dukes have shared in varying degrees.

French and English prose fiction, poetry and drama from the medieval to modern periods can be found in large numbers. Far from being limited to famous works by the likes of Shakespeare, Voltaire, Dickens and Rabelais, the coverage is vast and includes unknown authors who only produced one work in their lifetime as well as those whose output was prolific but somewhat unappreciated, like the poetry of Georgiana, Duchess of Devonshire.

There are thousands of Latin-language editions of ancient classics from the comedies of Aristophanes to the political writings of Cicero, epic poetry of Homer and histories of Livy. Some of these are amongst the earliest printed works in existence. Along with works by the Italian medieval masters, Petrarch, Boccaccio and Dante, these titles formed the basis of a classical education for centuries. Their presence alongside thousands of works in French and several hundred more in Italian should come as no great surprise as the aristocracy of seventeenth- and eighteenth-century England was increasingly well-versed in all four languages. There are a distinct lack of works in classical Greek, indicating the absence of schooling in this language amongst the Cavendish family – a reflection of early-modern reading habits in general as Greek was, and remains, a language of elite scholarship.

Perhaps too plentiful and varied to fully encapsulate in a short statement are the works of history in the Chatsworth Library. From the ‘first historian’ Herodotus, to the increasingly professionalised historical output of the late nineteenth century, this library holds numerous examples of everything in-between from medieval chronicles and early modern works on the English Civil War to Edward Gibbon’s Decline and Fall of the Roman Empire and Napoleon’s memoirs from Saint Helena. Studies of all periods and peoples of the globe are to be found here though the focus is overwhelmingly on European and British history, often in the form of the biographies and letters of monarchs, politicians, church figures and military leaders. Local and regional histories of the British Isles are an impressive feature, with some of the earliest studies of the Peak District and Derbyshire helping to set this vast collection in a firm geographical context.

Thousands of religious texts, from Christian philosophies, church histories and theological treatises to the reprinted texts of sermons and outright polemics reflect the family’s explicit interest in seventeenth-century debates between the Church of England, Catholic Church and various protestant sects, and a continuing interest in religious affairs throughout the centuries. There are several hundred bibles in an array of languages alongside hundreds of volumes of biblical criticism and commentary, as well as books of psalms and ethical, pedagogical works. There is very little coverage of other religions, religious texts or even studies of religious figures such as Buddha or Mohammed.
A large number of dictionaries, encyclopaedias and works of grammar can be found here. Most are in Latin, English or French or involve translations into these languages but the linguistic coverage of the texts is global including Mandarin, Arabic, Sanskrit and Welsh.

A visually stunning and numerically significant portion of the library is that concerning travel literature and natural history. In theory these two subjects should be easy to separate as travel narratives and early geographies are heavily fictionalised whereas one expects natural history to comprise ‘hard’ sciences like botany and zoology. However, the bulk of the works in the library are drawn from the period (roughly 1650-1850) in which the line between science and art was much more blurred; explorer’s narratives sought to entertain with exotic landscapes and adventurous tales but also documented new examples of flora and fauna for the European audience, whilst works of natural history often relied upon second and third-hand descriptions and fudged the boundaries between scientific observation and artistic invention, with some fantastical conclusions that in hindsight have more in common with science fiction.

The library’s collection of scientific and mathematical texts is broad and deep. Sixteenth- and seventeenth-century monoliths of the scientific revolution such as Newton’s Principia are present, as are the works of astronomer-mathematicians like Johannes Kepler and polymaths such as Athanasius Kircher. Many of these works, including numerous ephemerides (tables of data giving the historical position of celestial bodies) are, predictably enough, from the library of the scientist Henry Cavendish, though many of the early-modern landmarks of science and mathematics, from Copernicus to Leibnitz, were as central to elite education as the ancient Roman and Greek classics already mentioned and so were not solely collected by, or for, practicing scientists. 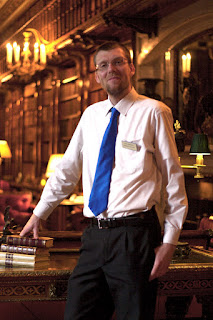 Finally, the library holds a collection of around 3,000 pamphlets and tracts bound together in several hundred large volumes. Many interesting subject areas are covered by these shorter, ephemeral publications. They were designed for quick sale by street vendors to give voice to more focused political outbursts, scientific papers or exciting tales of discoveries in foreign lands. The bulk of the items here were published between 1640 and 1850, with a particularly strong coverage of the political and religious strife in England between the Civil War and the ‘Glorious’ Revolution, and of the scientific discoveries of the eighteenth and nineteenth centuries.

Using this knowledge of the library’s contents, Chatsworth and the University of Sheffield are moving ahead with several collaborative projects that will help to develop our understanding of the collections. Over the next month or so I will be working on these identified projects and hope to share my progress with you, so watch this space!