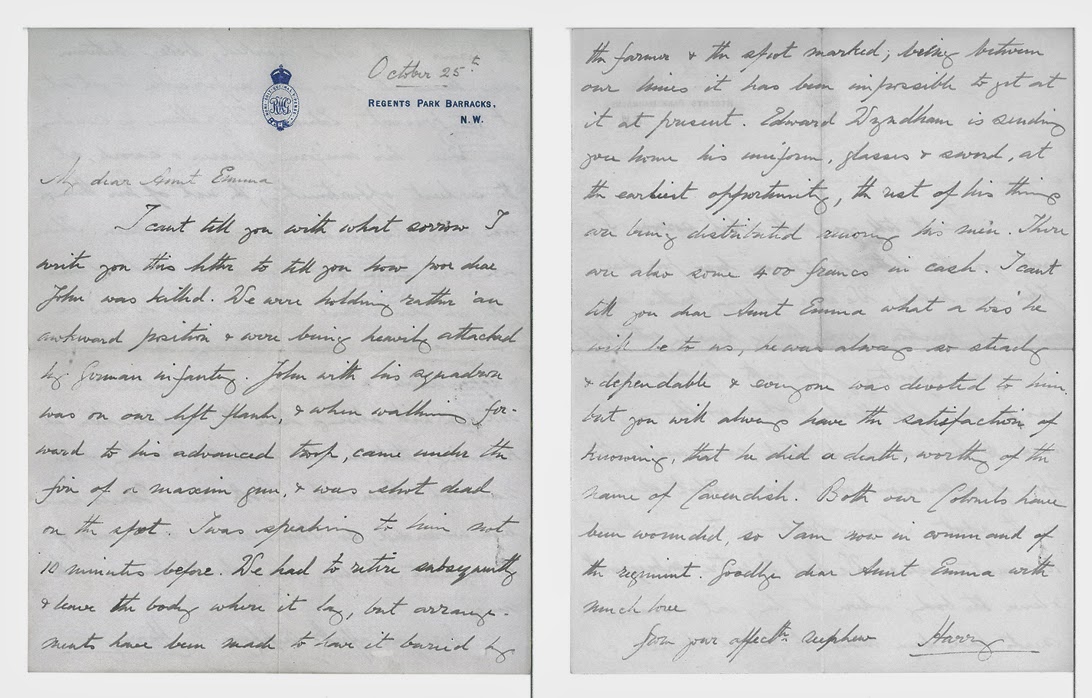 With 2014 marking the centenary of the outbreak of the First World War, much interest is taking place in what material archives hold surrounding the conflict. Chatsworth in Wartime is a current temporary exhibition we are running that looks at the Chatsworth Estate in both the First and Second World Wars. The archive here at Chatsworth was used in preparation for the exhibition, resulting in some documents being put on display.
As you can imagine, we hold much more material relating to the First World War than could be displayed, and while cataloguing the papers of Victor Cavendish, 9th Duke of Devonshire, Emma Harrison, one of our Collection Volunteers, discovered one particular letter concerning the death of the Duke’s brother, Lord John Cavendish, during the conflict.
John was a Major in the 1st Life Guards and was killed in action on 20 October 1914. The letter is dated 5 days later, 25 October [1914] and was discovered amongst correspondence belonging to Lady Edward Cavendish, the mother of John Cavendish and the 9th Duke. Addressed to ‘Aunt Emma’ and signed ‘Harry’, it is believed that the letter was sent by Henry Lascelles, cousin of John and the 9th Duke. The transcript below reveals how Henry broke the tragic news to his Aunt.

I can’t tell you with what sorrow I write you this letter to tell you how poor dear John was killed. We were holding rather an awkward position &amp; were being heavily attacked by German infantry. John with his squadron was on our left flank, &amp; when walking forward to his advanced troop, came under the fire of a maxim gun, &amp; was shot dead on the spot. I was speaking to him not 10 minutes before. We had to retire subsequently &amp; leave the body where it lay, but arrangements have been made to have it buried by the farmer &amp; the spot marked; being between our lines it has been impossible to get at it at present. Edward Wyndham is sending you home his uniform, glasses and sword, at the earliest opportunity, the rest of his things are being distributed among his men. There are also some 400 francs in cash. I can[‘]t tell you dear Aunt Emma what a loss he will be to us, he was always so steady and dependable and everyone was devoted to him, but you will always have the satisfaction of knowing, that he died a death, worthy of the name Cavendish. Both our Colonels have been wounded, so I am now in command of the regiment. Goodbye dear Aunt Emma with much love.