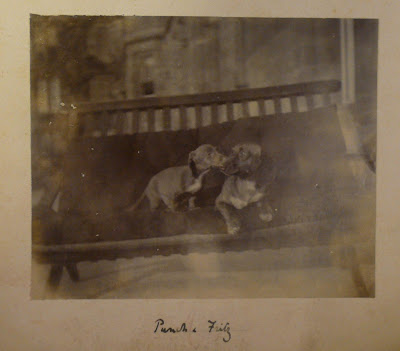 When cataloguing letters between Victor Cavendish, future 9th Duke of Devonshire and his wife Evelyn Cavendish, one of our volunteers has been able to chart the life of a four legged member of the Cavendish family, Punch the dog!

Punch is lovingly referred to (despite his misbehaviour) throughout Victor and Evelyn’s correspondence of 1893 and 1894. In one of the first instances that we hear about Punch, Evelyn writes to Victor about how she is trying to house train him after he ‘misbehav[ed] on the library carpet’. The next time we hear of him, the cheeky puppy had managed to sneak two bags of sweets into his stomach whilst Evelyn wasn’t looking. However, unfortunately for Punch the sweets did not agree with him, as we can see from Evelyn’s account to Victor the next day: ‘Punch was violently sick last night (not in your room) owing to the sweets of course’, this incident however did not put Punch off eating things he shouldn’t as Evelyn went on to say that ‘he ate a hook &amp; eye’.

Although a lively puppy, Evelyn liked to travel with Punch and she recounts a train journey she took with the dog and her brother Charlie from London to Cromer. She writes that the journey did not agree with Punch and that he was sick when they arrived and he slept on Evelyn’s bed all night. Fortunately, a couple of days later Punch appears to have made a full recovery, with Evelyn telling Victor how Charlie took Punch sea bathing and how ‘[h]e has been rather happy ever since’ and that ‘he ought to be much flattered as Charlie payed the bathing man 6d for him as if he was a person – and rubbed him dry with a bathing towel.’

Many of the letters are peppered with short lively accounts of Punch’s activities, but despite being a well-travelled dog, he never appeared to have a clean bill of health and poor Punch suffered a fatal illness in July 1894 that even a remedy of 'Beef Tea' could not cure. Victor had the awful task of telling Evelyn about Punch’s fate, writing: ‘Poor little Punch died last night’. Punch’s brief appearance in the lives and letters of Evelyn and Victor reveal the couple’s interest in and love of dogs, a trait found in many members of the Cavendish family.

In an act of pure coincidence, the above photograph of Punch and his companion Fritz was discovered. This photo is just one example of Victor and Evelyn’s love of photography, their letters revealing that Victor was always looking for the latest in new technology, with Evelyn chiding that she thought it better that Victor did not get another new camera because 'it muddles me to use so many.' A statement that I’m sure many of us can relate to when using adapting to new technology today!

These letters are an endearing set of personal correspondence between husband and wife that show us what life was like for the couple before they became Duke and Duchess of Devonshire. We can never know what Victor and Evelyn were like as people, but the style and vividness of their letters really can give us a feeling about their personalities, they show a caring husband and a couple that doted on each other and their families and through these letters we meet the people (and animals!) who played big parts in their lives.