Lord Frederick Cavendish was the son of William Cavendish, 7th Duke of Devonshire and a younger brother of Spencer Compton, 8th Duke of Devonshire. On 7 June 1864 he married Lucy Lyttelton, the daughter of 4th Baron Lyttelton. Following a promising political career seeing him in the posts of Private Secretary to Lord Granville and Prime Minister William Gladstone (his uncle by marriage) and Secretary of the Treasury, Lord Frederick became Chief Secretary of Ireland on 6 May 1882. However on that same day he and Thomas Henry Burke, the under-secretary were attacked and murdered whilst walking in Phoenix Park, Dublin. Lord Frederick’s papers largely consist of correspondence, including many letters sent to him by family and friends. There are personal letters sent by his father and sister when Lord Frederick was travelling in America in 1859-1860 and there are letters from acquaintances such as American lawyer and politician Richard Dana Junior. A run of general correspondence sees letters sent to Lord Frederick by William Gladstone and other leading politicians at the time. These letters offer us a view into many aspects of Lord Frederick’s life, including relationships with his family, his political life and his involvement in education.

Lady Frederick’s papers include a wonderful set of diaries that she kept ardently for 28 years and then sporadically following the death of her husband. These diaries were actually published by her nephew in 1927 and are an amazing insight into not only Lady Frederick’s own life, but also into the world that she lived in. These original volumes include Lucy’s own drawings, including these scenes drawn by a young Lucy, depicting the Charge of the Light Brigade.

In May 1882 Lady Frederick was given the tragic news that her husband had been killed. Writing in her diary in February 1883, she records the moment she was told about her husband being attacked:

“as soon as I saw her [Lady Louisa Egerton’s] face, the terror seized me, and I knew something must have happened to my darling. She had the dreadful telegram in her hand – but it said “dangerously wounded,” and I clung to the hope that he w[oul]d get over it.”

Lord Frederick was buried in Edensor churchyard on 11 May 1882, with 300 members of the House of Commons and 30,000 other persons making up his funeral cortège. Hundreds of letters of sympathy and resolutions of condolence were sent to the 7th Duke and family on the death of Lord Frederick. Tributes were still pouring in a year after Lord Frederick’s death, as Lady Edward Cavendish describes to her sister-in-law in as letter written on 13 May 1883. 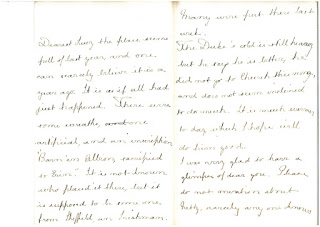 Together, the papers of Lord Frederick Cavendish and his wife Lady Frederick Cavendish give us a picture of the life of the son and daughter-in-law of a duke, highlighting their personal joys and tragedies. Alongside family dramas these papers can also give us an insight into the world of politics, not only through the wealth of correspondence sent to Lord Frederick but also through the animated entries in Lady Frederick’s diaries.