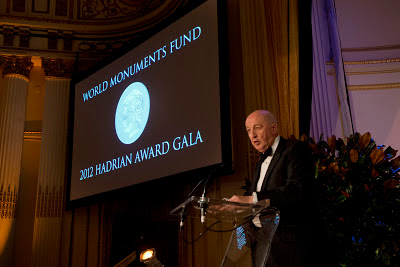 In New York on Tuesday 23 October 2012, the World Monuments Fund presented the Duke of Devonshire with the 2012 Watch Award, which recognises advocacy and significant achievement by an individual on behalf of heritage preservation. The World Monuments Fund is the leading independent organisation devoted to saving the world’s most treasured places. At the Hadrian Award Gala ceremony at The Plaza on Fifth Avenue on Tuesday night, special tribute was paid to the Duke by Caroline Kennedy who remarked upon how impressed she was during her last visit to Chatsworth by “the complicated planning and engineering of a comprehensive master plan which has restored the house, created new galleries to show the great Old Master Drawings, special Treasures of the Duchesses from the family vaults, and a restored neo-classical sculpture gallery.” On receiving the award the Duke of Devonshire said of the World Monument Fund: “When I think of the work that you do, the crucially important conservation, the seemingly impossible rescues that you manage every year all over the world I am humbled that you have chosen Chatsworth.

“However, thinking back over the last 60 years or so… it is somewhat extraordinary that this house, with its garden and park as twin pendants, have all survived and indeed are now facing the future with more confidence, more certainty than at any time since the middle of the 19th century."

“Most of the credit for this recovery belongs to my parents, Andrew and Debo. Thanks to their energy, imagination and a healthy dose of stubbornness over a tenure of 50 years they turned a sad and decrepit old place into a destination which three quarters of a million people enjoy visiting every year.”

“Chatsworth is also a huge source of local pride, pride that will be much increased with the announcement of this international award”.