Frankie Drummond Charig, Project Archivist, considers the significance of the link between Thomas Hobbes and his friend the mathematician Robert Payne, as illustrated through manuscripts in the Thomas Hobbes archive at Chatsworth.

As part of the Archive Revealed Cataloguing Project, I am currently preparing the catalogue of The Papers of and relating to Thomas Hobbes, which will be published online via the National Archives Discovery website and Archives Hub. This collection, alongside the papers of Hobbes at the British Library, is the most important collection of Hobbes papers internationally.

Thomas Hobbes was one of the great political thinkers and philosophers of modern history. Born in 1588, he was taught Latin and Greek at an early age and sent to study at Magdalen Hall, Oxford. Hobbes was hired almost straight out of university by William Cavendish (future first Earl of Devonshire), to tutor his son. This established a life-long connection between Hobbes and the Cavendish family. He became close friends with the 2nd Earl (accompanying him on a tour of France and Italy in 1614-15) and then acted as tutor and friend to the 3rd Earl who was 29 years his junior. In his role as tutor, Hobbes was also given responsibility for the library at Hardwick Hall. After returning from a sojourn of ten years in Paris in 1651, Hobbes again found himself in the service of the Cavendish family at Chatsworth and Hardwick and remained there for the rest of his life.

This collection comprises papers and manuscripts collected and created by Hobbes and members of the Cavendish family. They reflect Hobbes’s role as tutor, secretary and advisor to the Earls of Devonshire, as well as his life as philosopher, scientist, scholar and correspondent to a circle of foreign academics and scholars of the time.

The collection includes: some scribal manuscripts of Hobbes's life works (some with autograph annotations); some of Hobbes's unpublished or preparatory works; works of other contemporary scholars; mathematical and scientific notes; exercise books and writings belonging to Cavendishes tutored by Hobbes; a legal document concerning the 3rd Earl's inheritance; letters to Hobbes; his translations of Italian letters; digests of Aristotle and Scaliger; copies of parliamentary documents; poetry; contemporary library catalogues and brief administrative memoranda.

What has been interesting for me about this particular cataloguing project is seeing how the understanding of what these papers are and where they’ve come from has evolved significantly through scholarship over the last fifty years.

An example of this is the small collection of mathematical notes in the collection, which were once assumed to be in Hobbes’s autograph (like other items in the collection). However, it is now widely accepted that these papers are in fact the work of Robert Payne, mathematician and chaplain to the Earl of Newcastle, William Cavendish and his brother the scientist Charles Cavendish (the 3rd Earl of Devonshire’s cousins) in the 1630s. Payne served as a key figure in the intellectual and scientific circle around the Cavendish brothers which included other practitioners, such as William Oughtred, Walter Warner, John Pell, and of course Thomas Hobbes.

The confusion between the papers of Hobbes and Payne in this collection has partly come from the similarity between Payne’s hand and Hobbes’s. See here an example of Hobbes’s hand (right) and Payne’s (left).

In the chapter ‘Robert Payne, the Hobbes Manuscripts, and the 'Short Tract'’, in his book Aspects of Hobbes (Oxford, 2002), Noel Malcolm describes the many details that distinguish the hand of Hobbes from Payne.

What this discovery has revealed is how Hobbes was influenced by his friend Payne, in his work as a writer and also as maths tutor.

Another item in this collection (HS/A/10) was previously believed to be an early draft by Hobbes of his De corpore treatise, however the identification of the hand as Payne’s has shown that Hobbes probably provided Payne with an early copy of his manuscript and these notes are in fact Payne’s comments on Hobbes’s work, that then influenced the final version of De corpore that was published. Based on a comparison between these notes and the De corpore publication of 1655, chapter 6 and the chapters dealing with mathematical subjects beyond chapter 12, may have changed based on criticism Hobbes received from Payne (as pointed out by Malcolm in the chapter mentioned above).

Hobbes was a philosopher first and foremost and it seems he sought Payne’s mathematical expertise too in his role as maths tutor to the 3rd Earl of Devonshire. The archive collection contains a booklet of geometrical exercises set by Hobbes and carried out by the 3rd Earl (HS/D/2) – both the young earl’s hand and Hobbes’s can be seen in this booklet.

Geometrical exercises set by Hobbes and completed by the 3rd Earl, William Cavendish, with corollaries by Hobbes (HS/D/2)

Amongst Payne’s mathematical notes in the collection is a related manuscript (HS/C/3/5). It includes seven of the proofs initialled by Hobbes in HS/D/2 and in some cases they are improved and simplified versions of Hobbes’s original exercises. It seems highly likely Payne had a sight of HS/D/2 from Hobbes, when writing these notes. One can only guess how this came about, but given what we have seen so far with the publication of De corpore, perhaps Hobbes was using Payne’s mathematical knowledge to improve his own work.

It is not known how Payne’s papers eventually made their way into Hobbes’s archive at Chatsworth. However, Noel Malcolm suggests that possibly, after Payne’s death in 1651, his sister who was executor for his will sent the papers to Hobbes, knowing the close bond between the two men. 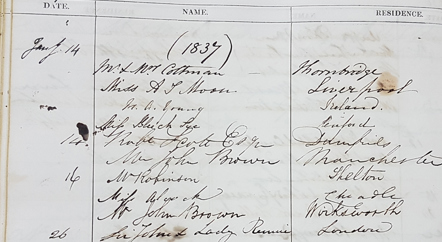 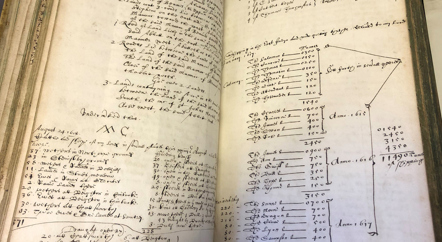