This summer marks the centenary of the Battle of the Somme, one of the most violent battles fought by the British during the First World War. Like many great estates across the country, Chatsworth was greatly affected by the conflict: its grounds hosted a Yeomanry Camp of Soldiers, its buildings were used as a Naval Hospital, and its men enlisted. This blog post will look at the story of Robert Randall, a gardener on the estate, who bravely fought for his country. 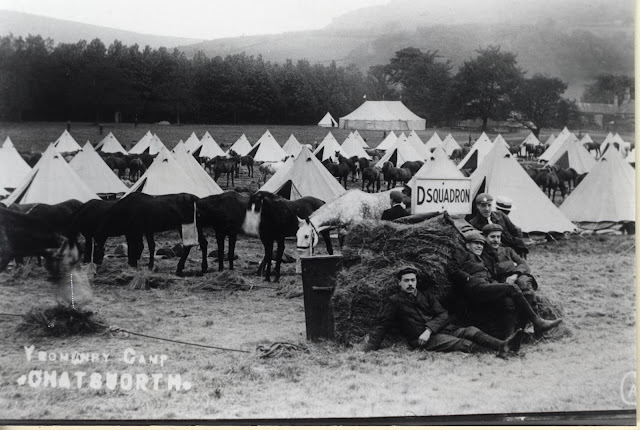 The Yeomanry Camp at Chatsworth during the First World War
Shortly after war was declared on 4th August 1914, there was a great rush amongst the men who lived and worked upon the Chatsworth Estate to enlist, and by January 1915, Chatsworth had the highest recruitment rate in Derbyshire. Particularly high numbers of men came from the outdoors staff, such as woodsmen and gardeners. As a result, the beautiful gardens at Chatsworth, enhanced with exotic plants collected by men like Wallace and Banks, who were the subject of the previous post, were reorganised along more practical lines. In May 1915, Duchess Evelyn wrote to her husband, the Ninth Duke, to inform him of the changes occurring:
Flowers don't matter, and we really could manage vegetables and fruit with the old man and girls. I have settled with Jennings to move as many carnations and orchids as the houses up here will hold as soon as possible. The houses in the kitchen garden either to be left empty or used to grow tomatoes for the market. It seems that there is a great demand for them. Whatever else we may settle this will be something definite in the right direction. 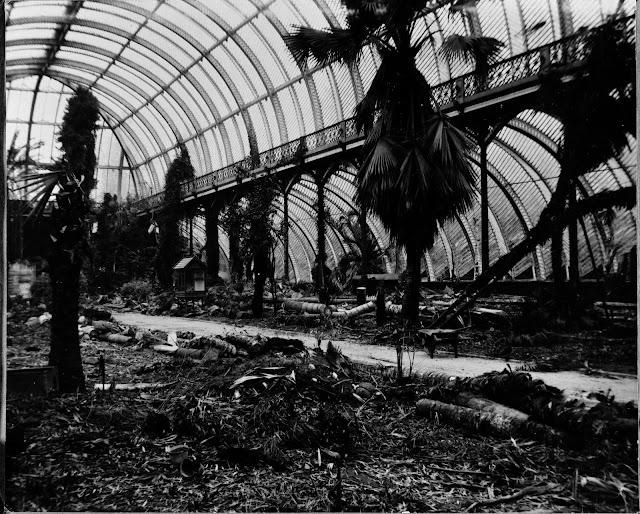 Decay in the Great Conservatory as a result of Austerity Measures during the First World War
Robert Randall signed up on the 29th August 1914, and he was one of the many gardeners who joined the Notts &amp; Derby Sherwood Foresters. His wartime experience in Turkey was drastically different to anything he had experienced whilst at Chatsworth. During the Sulva Bay landings of the Battle of Gallipoli, in 1915, he was injured. In the following letter, written to Head Gardener, Frank Jennings, he described his ordeal:
Dear Sir,
You will perhaps be surprised to hear that I am back in England again. It would see such a short time to you, but I can assure you it has seemed a long, long time to me since we left England, for so much is crowded into one's life out there. Have I enjoyed it? Yes very much, thank you. I can well understand the old warriors rejoining their regiments. There is nothing to equal the excitement of the first battle...
It was at the Suvla Bay engagement that I was "scratched". I shall never forget those 3 days...
Although the papers say we landed and advanced without opposition, I will tell you that they knew we were coming and fired on the boats before we landed. In fact some of the landing had to be done by scrambling through the water…
Unluckily I was hit about 100 yds. from their first line of trenches so did not participate in the final rush. It was here that so many fell. To my knowledge almost all our Officers are killed or wounded and 9 Sargeants are killed and 7 or 8 of us wounded. One bullet went through the sleeve of my tunic, another caught my chevrons but my skin was not touched. It was when lying down that I was hit…
Sincerely yours
R.E. Randall Sgt. 9th Sherwood Foresters
30/08/1915
Robert was very lucky. He was sent back to England to recover from his injuries, and he survived the war. Not all his former colleagues were so fortunate. As we reflect on the war which took place a hundred years ago, it’s important to remember the brave sacrifices made by ordinary men like Robert, the gardener who became a soldier.