Between 1838 and 1842, the 6th Duke of Devonshire demolished the old estate village of Edensor and rebuilt it further away from Chatsworth as the model village you see today, because it was spoiling the view from his windows. Or so the story goes. The image of a despotic duke demanding the destruction of all the houses he could see from Chatsworth is one that captures the imagination and conforms to our expectations of nineteenth-century aristocrats. However, it is not very accurate.

It is clear from his letters and diaries that the 6th Duke cared just as much about his tenants as he did about the appearance of the estate. In a letter to his accountant he wrote, ‘I take great interest in the people and in the houses... I think that near such a place as this the villages ought to [be] remarkable for neatness and comfort’. His intention was not to move Edensor out of sight, because he could not see it from Chatsworth anyway, since the visible mill, inn and vicarage had already been cleared in the mid-eighteenth century.

Much of the new village was in the same place as the old one, and the church has not moved at all. Although the Duke’s intentions were much better than the popular story suggests, not every villager was able to benefit from the beautiful new houses. Of the 500 people that lived in Edensor before demolitions began in 1817, only 60% returned after its completion. The new village would have been unrecognisable. Every trace of the busy old high street, with its ramshackle thatched cottages, workshops and village pub, was gone. With the exception of one house. 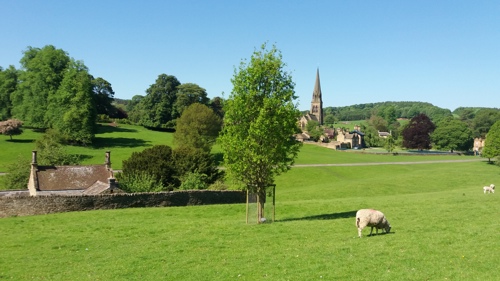 The view of Edensor from the back of Gardener's Cottage

There are several stories about why Gardener’s Cottage, as it is known today, was not demolished along with its neighbours. The favourite seems to be that the occupant was a tenant who refused to move, or a freeholder who refused to sell. Another explanation is that the resident was ill or elderly, and the Duke did not wish to disturb them. This second story is in keeping with the 6th Duke’s character. In his 1845 Handbook of Chatsworth and Hardwick, for example, he explains that many of Chatsworth rooms remained unchanged for decades, ‘from unwillingness to disturb Hannah Gregory, the housekeeper’

A View of Chatsworth From the East by Jan Siberechts, now hanging in the Green Satin Room, contains the most complete image of old Edensor (in the top left corner) as it looked c.1703.

A common focus in the stories about Edensor and Gardener’s Cottage is the landowner-tenant relationship. In reality, the tenants had far more contact with an individual who is missing from the stories: the land agent. At the time of Edensor’s reconstruction this was a man called Sydney Smithers. When the 6th Duke and his head gardener Joseph Paxton departed for a year-long tour of Europe in October 1838, Smithers was left in charge of the works at Edensor. His letters might finally solve the mystery of why Gardener’s Cottage survived demolition. 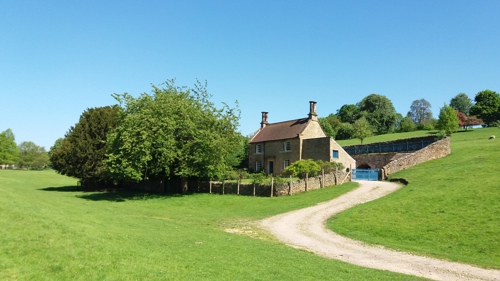 Gardener’s Cottage, the last survivor of the old high street

Sydney Smithers was a pragmatist who kept a close eye on the estate accounts. When the 6th Duke wanted to build more houses at Edensor, Smithers put his foot down. He wrote to the accountant in London, ‘I just ventured to observe that the outlay here just now was large. I believe you will find His Grace quite reconciled to give up these two objects of increasing expenditure’. Smithers saved money by reusing materials and repairing houses where possible, instead of rebuilding. Some houses were in such poor repair that they were beyond saving: ‘Bampton’s house was obliged to be taken entirely down, when the attempt was made to put in new windows the whole fabric tottered... Mr Smithers sanctioned it being done’. He had more success with others. Some of Edensor’s ‘new’ houses were only fitted with new fronts, while the old walls at the back still remain.

In one letter Sydney Smithers writes about a house that ‘stands conspicuous’ - Gardener’s Cottage. As with some of the other houses, he recommends that the house is repaired, rather than rebuilt: ‘The Buildings in the Village [are] settled to be done this year, with the exception of the repair of one Cottage... I do not think it would be well to [delay], as it stands conspicuous and would detract from the effect of the whole’. 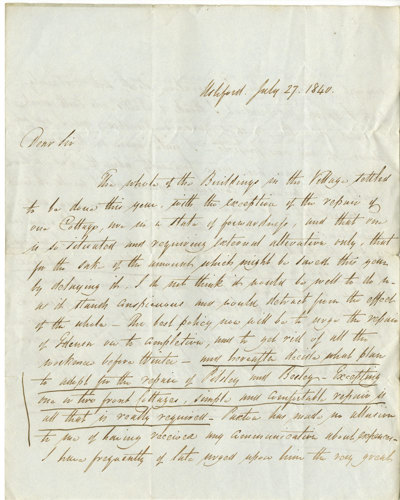 Letter from Sydney Smithers about the repair of cottages in Edensor, 1840

It remains possible that a stubborn resident refused to move out, or that the Duke did not wish to disturb a suffering tenant. However, the more likely, and more boring explanation behind the survival of Gardener’s Cottage, is that Sydney Smithers did not see the sense in demolishing a perfectly good house and building an expensive replacement. The land agents were the often-forgotten mediators of country estate communities, and it was to them that both tenants and landowners spoke when difficult decisions needed to be made.

When you next travel past Gardener’s Cottage, spare a thought for Smithers, who had the challenging task of balancing the estate accounts, the needs of tenants and the wishes of the duke.