‘Her head was a wonderful exhibition’ wrote The Morning Post about Duchess Georgiana after an evening at the Opera. Elaborately decorated with birds, fruit or even a ship in sail, the three foot hair tower was a work of art and a trend Georgiana made popular. After her marriage to the 5th Duke (1748-1811), Georgiana quickly became a leader of fashion and one of the most celebrated beauties of her time. Newspapers seemed more interested in what was on the Duchess’s head rather than what was on the stage. 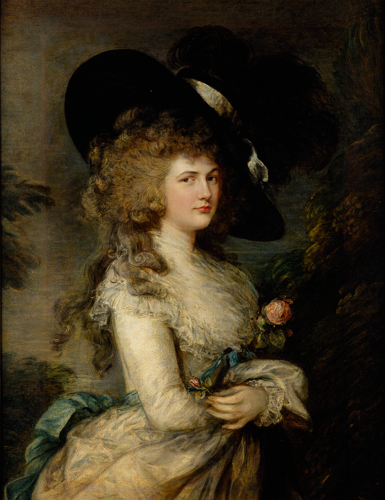 Duchess Georgiana painted by Thomas Gainsborough. Georgiana is painted wearing another of her famous trends, the picture hat.

Writing from Paris, one of the Duchess’s friends told her that young ladies now had to sit on the floors of their carriages as the trend for tall hair made it impossible for them to sit on the seats. Not that this seemed to put Georgiana off the trend. Such tall and detailed designs could not be constructed single-handedly and it took more than a lady’s maid to prepare a duchess for an evening out.

To maintain her position as a leader of fashion, Georgiana employed a servant you might not expect: her own hairdresser. Mr Gilbert entered Devonshire House as Georgiana’s hairdresser soon after her marriage to the Duke. It was common for hairdressers to be male as it was a profession, much like a barber or a wigmaker. He was paid a wage of £52 10 shillings a year. This was a higher wage than all of the female servants, including the housekeeper, and more than almost all of the other male servants including the Duke’s valet. 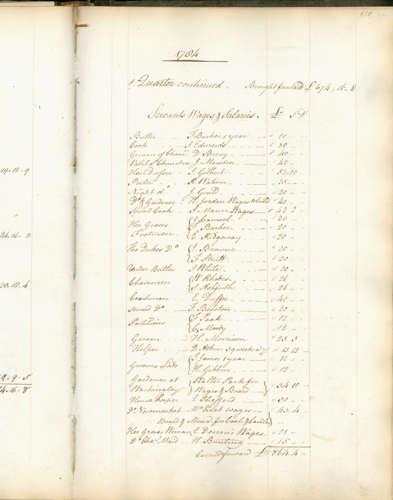 An account book for Devonshire House. Mr Gilbert, the hairdresser, is listed between the cook and the valet de chambre.

But if he was a professional then why was the hairdresser listed alongside the servants? His inclusion in this list shows how often the Duchess called upon his services, so much so that he was paid a regular, yearly wage. Although he was not a servant in the same way a housemaid or footman was, there were a number of similarities between the hairdresser and the rest of the servants employed by the Duke.

The Duke and Duchess did not spend all their time in one place; they moved around their many houses, visited friends and family or travelled for their health. When the family did travel their servants did one of two things: they either stayed behind or travelled with the family. The hairdresser did both. Like other servants who remained at Devonshire House, staying behind meant he received boardwages, an allowance given on top of a servant’s wage which allowed them to buy food when the Duke was away.

He also had the opportunity to travel with the family. A letter written by the Duchess to her mother included a drawing by Georgiana showing how she was dressed when she visited friends. Paying for her hairdresser to travel with her made sure the Duchess was always presentable and fashionable. In fact Mr Gilbert’s travel expenses were higher than those of the butler, the footman and the house steward. 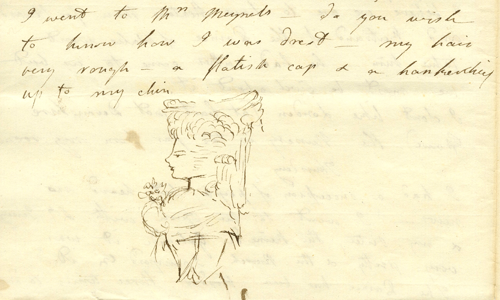 A drawing of Georgiana in a letter written by Duchess Georgiana to her mother Lady Spencer.

What did the Duke think to Georgiana’s fashion trends? After praising the Duchess’s hair, a newspaper reported that the Duke was happy to support his wife’s fashion choices as long as she did not think it ‘necessary that I should wear any ornament on my head’. In fact, the Duchess was not the first member of the family to employ someone for the purpose of maintaining their hair: the 3rd Earl of Devonshire employed his own barber in 1660. Although a luxury, Georgiana’s hairdresser was an important part of her household and shows that it was not always easy to define who was and who was not a servant.