Discover more about the medieval woodland on the hill behind Chatsworth House.

If you're looking for a free day out in the Peak District, why not come and explore Stand Wood? With miles of footpaths to explore, along with lakes, historic features and a wealth of wildlife, there's plenty for the whole family to enjoy.

Things to do in Stand Wood 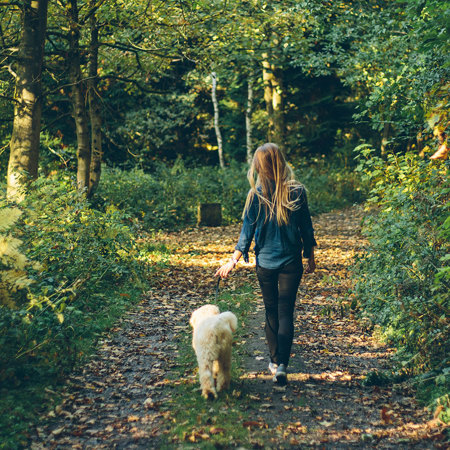 Explore the wood to discover the lakes and historic features within. Follow our waymarked routes or create your own path.

Go on a bug safari

Get up close to nature by going on a minibeast hunt in the wood - a fantastic way to learn more about wildlife and connect to the natural world. 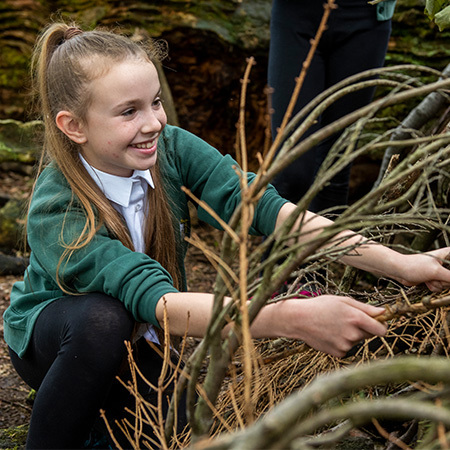 Gather fallen leaves and branches and use them to create your very own den - a fun activity for the whole family.

Where is Stand Wood?

The entrance to Stand wood is located by the farmyard and adventure playground, which is shown on the welcome map provided at the main car park entrance. Stand Wood is free to access, however parking charges do apply.

Parts of Stand Wood that lie along the steep hill behind Chatsworth have probably been wooded since at least medieval times. The trees now growing within the wood are, however, more recent; among the oldest, at the crest, are several mature beech trees from the 18th or early 19th century.

Senior’s plan of 1617 and Knyff’s drawing of 1699 suggest that much of the woodland directly upslope from the house had been removed sometime earlier, and extensive replanting seems to have taken place here from the 18th century onwards. The woodlands on the high shelf above the escarpment were mostly created in the decades either side of 1800.

The 17th century formal gardens around the house were divided from the deer park by a boundary wall, but this was removed in the mid-18th century when the landscape was transformed by Brown and Millican. A new boundary wall was built in the late 1830s, clearly separating the two areas again. Stand Wood was, however, still evidently seen as part of the pleasure grounds, as it was extensively ornamented by Paxton at this time.

The most impressive survival at Chatsworth from the days of Bess of Hardwick is the Hunting Tower, built in the 1570s. This high prospect tower is sited on the crest of the hill, ideally placed to provide extensive views of the deer park, both for locating deer, observing the hunting, as well as being a place for banquets. Guests would have enjoyed the contrasting views to the west, with its ‘tamed’ landscape, including the house and formal gardens below and fields beyond.

Out of sight of the house and gardens, the shelf above Stand Wood has four reservoirs and the site of a fifth, created at various dates to provide a reliable water supply for the ponds, fountains and other water features within the gardens. Old Pond, the smallest and earliest, remained in use into the 20th century but is now dry; although its overgrown earthworks still survive. This was probably constructed in the 1690s to supply the Great Cascade. The next to be built was the much larger Swiss Lake, first known as the Great Pond, begun in 1710 and finished in 1717. This is supplied by Umberley Brook Leat, which runs from the moorland to the east.

In the 19th century, further lakes were added. Open Pond was constructed sometime between 1824 and 1831, while Ring Pond dates between 1830 and 1832. The Emperor Lake was started in 1845 and enlarged in 1849; this fed Paxton’s great Emperor Fountain in the gardens. The lake is supplied from the north-east by a long open stream dug across the moors between 1847 and 1848, which has come to be known as the Emperor Stream.

Swiss Lake acquired its current name from Swiss Cottage, built between 1839 and 1842. This was designed to be viewed from the woodland drive on the other side of the lake, which forms part of a scenic carriage route created by Paxton in the late 1830s.

Below the summit of the steep hill stands the folly, known as The Aqueduct: four immense arches with a waterfall falling from the end. Immediately above there is a second, much smaller, waterfall falling over and amongst the boulders; that at the top of the hill is traditionally known as the Sowter Stone. Both waterfalls are fed by the Ring Pond.

The view from above the Aqueduct

The upper falls once had a footbridge immediately below them, of which only an abutment and slots for timbers now survive. The bridge was part of a revetted path that followed a scenic route up through Stand Wood to The Stand itself, taking in the Aqueduct and Sowter Stone waterfalls, and featuring a stone staircase between cliffs linking an upper and lower route. All these features were again created as part of the beautification of the Stand Wood area carried out by Paxton in the late 1830s and early 1840s.